The stakes will be higher than ever in the 2019 eSailing World Championship as the second season was officially launched today (22 January 2018) at boot Düsseldorf in Germany.

Existing eSailors and new players are invited to race, for free, and the first challenge is available now and can be played on desktop as well as iOS and Android devices:

A prize fund of $10,000 USD, generously provided by Virtual Regatta, the leading digital sailing platform, will be up for grabs and will be awarded to the 2019 champion.

Running for eight months, the 2019 season will be governed by the Virtual Racing Rules of Sailing and will feature daily challenges, in-season PlayOffs, a Finals PlayOff and a Live Final in Bermuda at the end of October.

Challenges will either be connected to real-world sailing events, such as the Hempel World Cup Series, or will be digital challenges. Each one will be graded based on its importance and eSailors will earn ranking points towards the eSailing World Championship World Ranking. Challenge winners and top ranked players will advance to the in-season PlayOffs, of which there will be one in the winter, spring and summer.

Alongside the regular eSailing World Championship, up to ten National eSailing Championships will be held, allowing eSailors the opportunity to gain domestic bragging rights. The Deutscher Segler-Verband are World Sailing’s first Member National Authority to commit with a German eSailing National Championship to take place in 2019. Further nations and formats will be announced shortly.

The leading eSailors from the in-season PlayOffs, challenge winners and the top ten national eSailors will advance to September’s 1,000 player Final PlayOff. A series of challenges will determine who the top global eSailors are and who will be invited to the Live Final on an all-expenses paid trip to Bermuda, host of World Sailing’s 2019 Annual Conference.

The eSailors will then fight for the coveted eSailing World Championship title and the $10,000 USD prize fund.

All major World Sailing events will feature live eSailing events, including the Hempel World Cup Series which starts next week in Miami, Florida, USA. eSailors worldwide will have the opportunity to race against Olympic champions and prospective 2020 Olympians and spectators will be able to engage directly on-site with the sport.

Internationally recognised boats such as the J/70, Nacra 17 and 49er will continue to feature in the game in 2019 with further, exciting boats with the intricate details that make them unique to be added throughout the year. Furthermore, additional venues will added, joining the likes of San Francisco, Porto Cervo and Marseille.

Andy Hunt, World Sailing CEO, said, «The 2018 eSailing World Championship was a brave new venture for World Sailing. We have a duty to promote the sport in all its forms and reaching 169,000 people shows that the first year was a great success.

«It is important that we now build on that success and continue to appeal to the expert sailors and non-sailors alike. The aim is to try and inspire more people to take up the sport and through this game we will look to provide opportunities through our members to increase participation of our sport.

«2019 is another key year in the development of the eSailing World Championship and with the developments made in the season structure and the gameplay, I’m excited to see what the future holds.»

Philippe Guigné, Founder and CEO of Virtual Regatta, commented, «The first eSailing World Championship season went beyond our expectations and was a great success.

«For the second season, we have evolved, adding in new features yet keeping the heart of the gameplay central to all our initiatives. In 2019, we will introduce more language versions with the game available in Chinese, English, French, Italian, Portuguese and Spanish.

«New sailing cities and boats will be added throughout the year and we have added more social features to allow greater connections between sailors and eSailors around the world.» 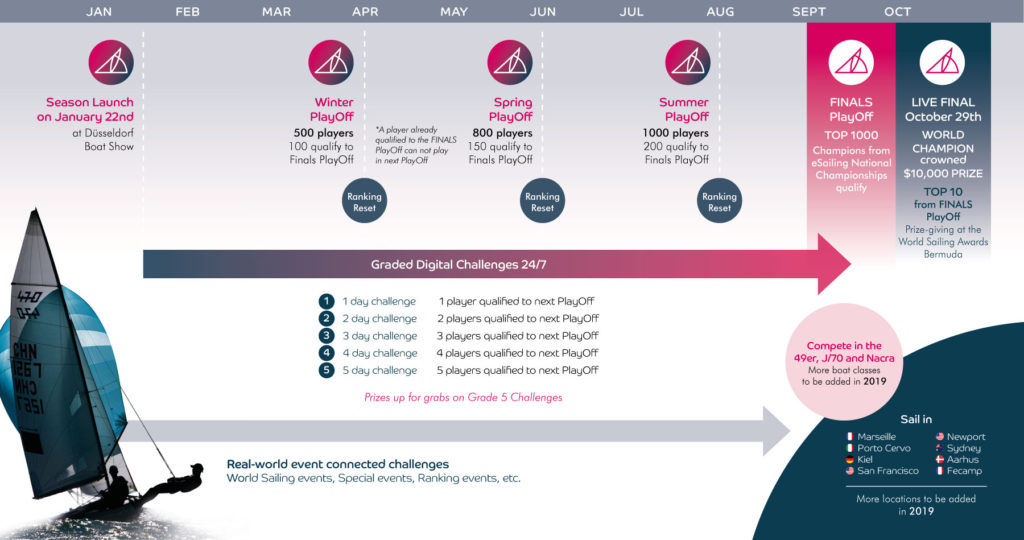