The Italian yacht builder celebrated the delivery of “Spectre”, a unique in the world 69-meter full custom megayacht to repeat clients, US couple John and Jeanette Staluppi, in an exclusive and lavish ceremony at its Livorno shipyard.

Benetti has delivered M/Y “Spectre” to John and Jeanette Staluppi, experienced owners who adore James Bond filmography, 50s and 60s sports car adrenaline excitement, and the Made in Italy ethos.

Staluppi’s wish is to feel the same emotions on board the new megayacht as they did in a motorcar on the racetrack. The main challenge for Giorgio M. Cassetta, who designed the exterior lines, was to create an extremely dynamic yacht with huge volumes. The result is a very “traditional” vessel with a long and sharp bow and extended superstructure volumes that slide towards stern. Huge attention was focused on the connection between exterior line detail and interior design: the outdoor fixed furniture has been designed and custom made to correspond with the interior focus on shiny teak, black lines and steel.

The strongly sporty appearance was achieved by the volume and proportion fluidity. All of which contribute to making “Spectre” a yacht equal in performance to an aluminium yachts. The contribution and support of the Dutch firm Mulder Design, which was responsible for the structural design, the hull and the propulsion system, was hugely important in this achievement. Due to many clever measures the weight of the yacht has been reduced considerably. The performance, of what Frank Mulder, founder of the eponymous studio, has baptized as the “High Speed Cruising Hull”, is incredible. The maximum speed is 21.2 knots, 30% higher than a traditional displacement hull and the autonomy is equal to 6,500 nautical miles at the considerable speed of 12 knots.

“Spectre” also features Naiad Dynamics Total Ride Control® technology [1], installed for the first time on a yacht of this type. Originally developed by Naiad for commercial and naval ships, thanks to the collaboration with Mulder Design, this technology was later configured to be installed on board “Spectre”. The active system ensures a significant increase in navigation stability and improved on-board comfort thanks to two roll stabilizing fins, two forward pitch control canards and three independently controlled stern interceptor blades. 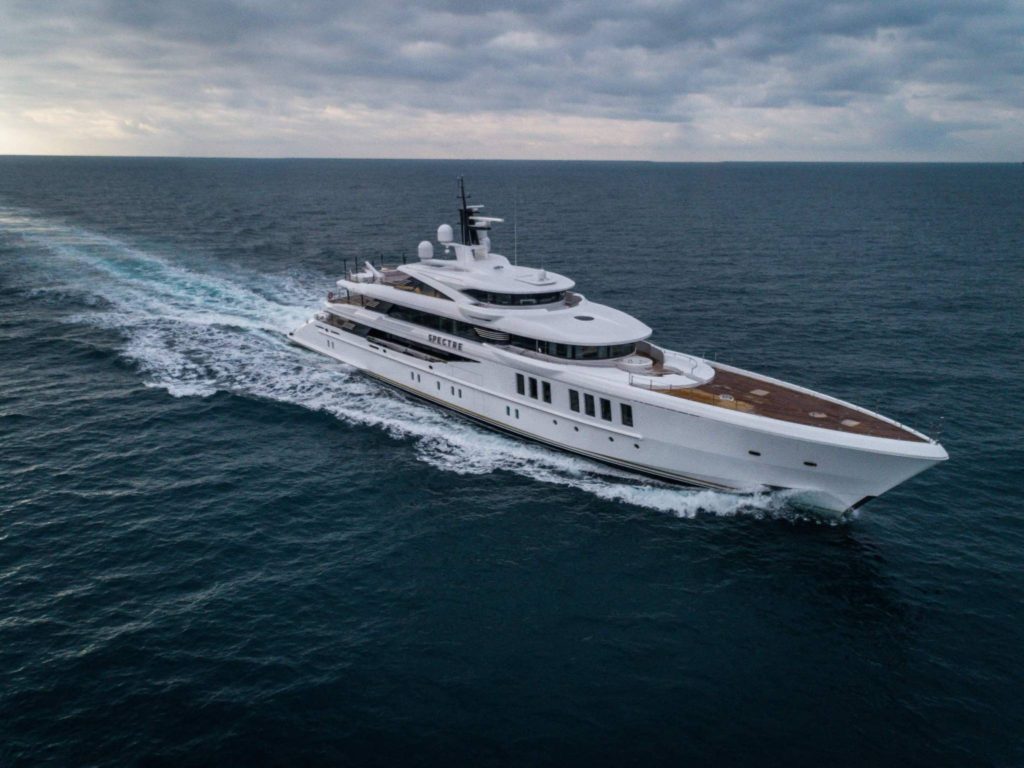